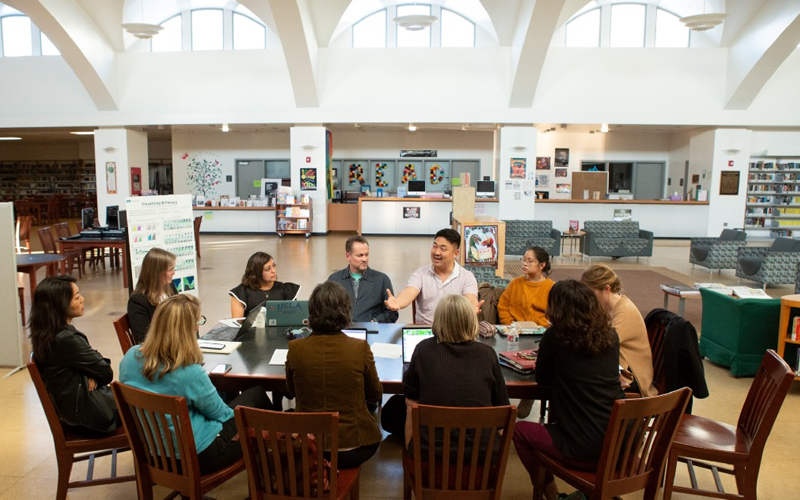 Allison Shelley for American Education: Images of Teachers and Students in Action

This past week, Donald Trump directed federal agencies to eliminate anti-racism training examining white privilege and critical race theory, calling them “a sickness that cannot be allowed to continue.” And just last month, he shared a two-point education platform for a potential second term. Half of it consisted of “Teach American Exceptionalism.” He briefly touched on the idea during his speech at the Republican National Convention, pledging to “fully restore patriotic education to our schools.” Just this past weekend, in a Sunday morning tweet, Trump claimed he’d be investigating and withdrawing funding from California schools that were using the Pulitzer Prize-winning New York Times Magazine’s 1619 Project — which explores how enslavement has shaped American political, social and economic institutions.

Continuing to whitewash our public institutions will only harm our future prosperity as a nation. In his direction to federal officials to ban anti-racism training, Trump is preventing us from achieving the ideals on which our democracy depends. Critical race theory, a framework developed by Derrick Bell and other notable scholars that examines how race and racism are perpetuated through existing legal and cultural systems, is a fundamental frame for examining how white supremacy has become the dominant culture in our society. Anti-racism training is not “un-American” as Trump touts — but deciding not to engage with our nation’s deep history of white supremacy certainly is.

As a white man who holds positions of power and privilege both in my personal life and in my career, I have firsthand experience diving into examinations of racism and the dominance of white culture. Engaging in anti-racism training has at times felt unpleasant, tedious, and tiresome. But that discomfort is unmatched by the pain that people of color in this nation experience on a daily basis.

In urging public schools to “teach American exceptionalism,” Trump paints an incomplete and misleading picture of history. This ideology harms our children and society. Many believe that our education system can transform people’s lives, with the potential to open doors of opportunity that were previously shut. But American exceptionalism, coded in language and policies that sustain a culture organized to maintain the dominance of white people, is the reason why public education has not lived up to its promise.

Through these cowardly actions, Trump is blatantly ignoring how systemic racism undergirds all of our public institutions. Distortions of liberty put forward in his vows to protect suburbs invoke policies like the G.I. bill and redlining, which barred Black Americans from homeownership. It brings us to our current moment — where law enforcement will murder Black people in their homes or on the street, but white killers draped in weapons are peacefully taken into custody — or even-handed water.

This is not the time to back away from exploring our nation’s true history and confronting white supremacy culture — one that falsely espouses a value of equality while persistently privileging those already so advantaged and oppressing Black people and others. This is not only about the activities of abhorrent fringe groups. It is about ignoring the unchecked assumptions that shape every aspect of our society.

And rather than retreat from facing these insidious pieces of our past and present, it’s time to ramp things up. Resistance to this work means there is a new level of consciousness about its impact — let’s take advantage of this opportunity!

At the Nellie Mae Education Foundation, we are directing our grantmaking to efforts such as a fund dedicated to supporting nonprofits led by people of color, and another to Black educators leading conversations about race in their schools and communities. And we are looking ahead to supporting deeper attention by all of us — and white people in particular — to what is corrupting our collective spirit as a nation.

We must stay the course. Effective tools and resources that the President is trying to shelve only make this important work easier. It is not until we are able to confront our original sin as a nation founded on a bedrock of white supremacy culture that we will truly be able to “make America great.”