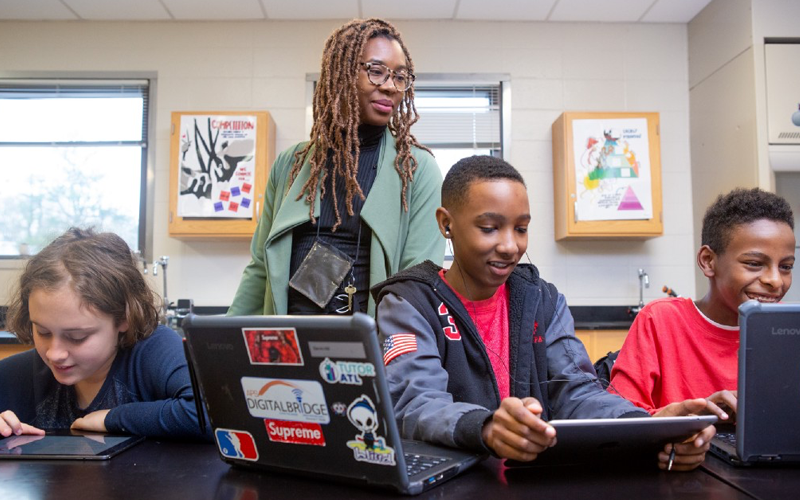 Photo by Allison Shelley for American Education: Images of Teachers and Students in Action, Posted by Aharewood

I vividly recall the first time I led a conversation on race in my classroom. The conversation happened on Monday, February 27th, the day after Trayvon Martin was murdered by George Zimmerman. At the time, I was a 22-year old resident in the Boston Teacher Residency program.

The conversation with my sixth-grade scholars happened just as schools were reopening from February vacation week. I had been in the program for seven months and had recently become the lead teacher for two classes of students.

At the time, my sixth graders and I were reading Maniac Magee, a fictional novel that explores the topic of racial segregation. In the week leading to February vacation, we had created a visual representation of the West and East Ends in this fictional town the protagonist frequently crossed and that separated the Black and White communities.

While we discussed racial segregation in the context of the novel and looked at the New York Times’ Mapping Segregation map in Boston, the discussion my mentor and I had prepared to have quickly made the themes of the novel so much more real.

As my enthusiastic sixth graders all clad in school uniform entered the classroom, we gathered in a circle, which was a contrast from the usual rows in the classroom. My mentor teacher and I both took deep breaths preparing to discuss the elephant in the room, and in many classrooms and communities across this country.

We first asked students to jot down what they heard on the news and at home. They provided so many different tidbits and details of the story: “Black boy”, “iced tea”, “Skittles”, “murder”, “Florida”, “going home”, “hoodie”, “fight”, “gun”, “going to jail.”

From this initial entry point, we then discussed how they felt about the murder of Trayvon Martin. Some students shared they felt great sadness. Others expressed anger and fear. Many voiced worries for Trayvon’s family and friends. Lastly, students asserted a need for justice and fairness.

Unfortunately, I would go on to facilitate many similar conversations year after year — with the murders of Eric Garner, Mike Brown, Tamir Rice, and Sandra Bland. And while I became more skilled at leading these conversations, they were never easy. The emotional weight, from my students and myself, of it all, always lingered.

I learned to center conversations about race and anti-Blackness into my school’s core texts through the use of questions like, “What does the reference of Othello to a “black sheep” or “Moor” reveal about racism and inclusion in Venice, Italy?” After all, how can you teach the themes in Othello without discussing race and anti-Blackness?

Still reflecting on this experience years later, I realize that although this conversation brought great fear and anxiety, it was absolutely necessary for the classroom. Students, like their educators, are watching the news and using social media. They are having these conversations at home. I am reminded that we need to have these conversations in classrooms regardless of how uncomfortable, afraid and emotionally naked we may feel. Not talking about race in classrooms further invalidates the real-world experiences of the Black community and Black youth.

As a former Black educator, I am incredibly proud and overjoyed to announce today that the Nellie Mae Education Foundation is launching a Rapid Response RFP that centers Black educators and those in service of Black lives inside and outside of their classrooms. I invite you to read more about the opportunity here.